High performance liquid chromatography or commonly known as HPLC is an analytical technique used to separate, identify or quantify each component in a mixture. The mixture is separated using the basic principle of column chromatography and then identified and quantified by spectroscopy. A computer analyzes the data show the output in display. 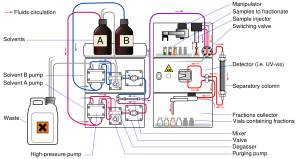 How Does HPLC Work?

HPLC is a improved form of column chromatography. The difference is, here instead of dripping solvent under gravity a pressure of up to 400 atmosphere is applied on the chromatography to have a quick separation. And a very smaller particle size of column packing material is used. Thus the separation is much better in HPLC. The steps involved in this process is as follows:

After placing the sample in the sample reservoir the injection process is fully automated. The injector injects the sample into the continuously flowing mobile phase stream that carries the sample to the HPLC column.

The time required for the mixture of component to travel through the column and to detector to display a maximum peak height for that compound. This retention time depends on:

If the solution is diluted the area of the peak will be less, while the detention time will be same. Thus it is possible to detect a substance present even in a very small quantity.