Explanation of the symbols in Arrhenius equation

The temperature must be measured or converted to kelvin.

R is the gas constant. The value of R is calculated from the ideal gas equation PV = nRT, which relates temperature, pressure and volume of a particular moles of a gas.

The activation energy of a reaction is the minimum energy required for the reactants to form the the products. It must be expressed on joules per mole. 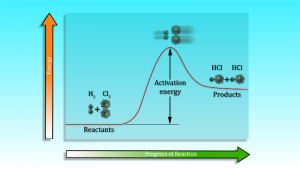 Pre-exponential factor A is also known as frequency factor which includes the frequency of collision and its orientation. It is normally constant in a small temperature ranges.

Taking the log of each side of the Arrhenius equation (i), we get

If k1 and k2 is the rate constant at temperature T1 and T2 respectively, we can rewrite the equation as:

At temperature T1 and the rate constant k1,

At temperature T2 and the rate constant k2,

Subtracting the equation (iii) from (iv), we get 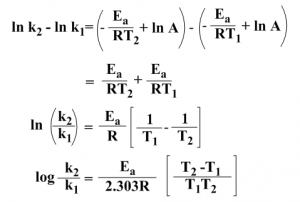 From this equation the activation energy Ea can be calculated.

Calculation of Ea from a plot

Equation (ii) can be rewritten as

The equation (v) corresponds to the straight line equation y = mx + b. The two variables in this equation are ln k and 1/T. Plotting these two we get a straight line. From the slop of the line we can calculate Ea. 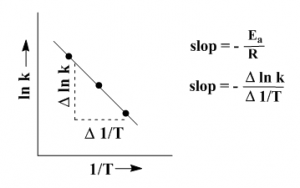 Theoretical explanation of the equation

The collision theory states that the gaseous chemical reaction occurs when molecules collide with sufficient kinetic energy along their lines of center that exceeds activation energy Ea. The mathematical expression of this theory is very similar to the Arrhenius equation.

This is also known as activated complex theory or absolute rate theory. According to this theory: simply the collisions between two molecules does not causes a reaction. During an effective collision, the reactant molecules form a transition state which decomposes to give the products. Thus

A partial bond is formed between A and B with the weakening of bond B-C at the same time. This stage is known as transition state and written with dotted line as A—B—C. The expression of transition state theory to get Gibbs energy of activation also similar to the Arrhenius equation. 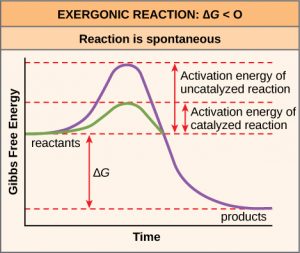