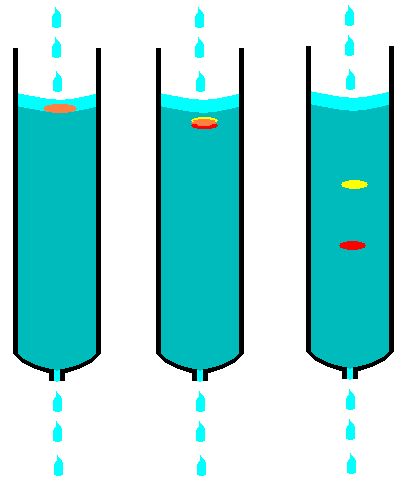 A glass tube with a circle large inlet and a small outlet with a plug or tap, named as column is used for this column chromatography. The column is placed vertically with a stand where the outlet is downward.

A piece of cotton wool is entered into the outlet and placed over the plug if there are no glass wool present to stop escaping the stationery phase from the column. There are two procedure to prepare the column by packing with silica or alumina:

Dry method: In dry method at first the column is filled with dry powdered silica. Then the mobile phase, a suitable solvent is flushed through it until all the silica are wet and settled. From this point till the end always the column need to keep wet with solvent.

Wet method: In wet method firstly a slurry of silica and solvent is prepared and then poured onto the column using a funnel. More solvent must be used until the silica is settled into it.

Step 1: The mobile phase or eluent is either solvent or solvent mixture. The upper level of mobile phase should be same as the stationery phase. That means the stationery phase should be wet with the solvent. On this stage the compound mixture what need to be separated, are added from the top of the column in such a way that the top level of it is not disturbed. By turning on the tap below it is allowed to adsorbed on the surface of the silica.

Step 2: Then the solvent or a suitable solvent mixture is added at first touching the side of the glass column slowly and carefully so that the top level of the stationery phase is not disturbed. The solvent is repeatedly added as many times as needed throughout the process.

Suppose if any compound mixture contains three compounds blue, red and green. According to polarity the order of these compounds are blue>red>green. That means blue is the most polar compound and thus will have less tendency to move along with the mobile phase.

Step 4: The green colored compound will travel first as it is less polar that other two. When it is near end of the column a clean test tube is taken to collect the green sample. After this the red and at last the most polar blue compound is collected, all in separate test tubes.

Thus a compound mixture is separated or purified by using column chromatography.