When two atoms with equal electronegativity are bonded together in a molecule, a non polar bond is formed. These two atoms attracts bonding electrons equally towards themselves to form this sort of bond. It is more likely to happen in a molecule composed of same atoms. e.g. H2, N2 etc. 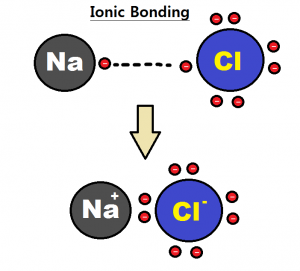 Electronegativity in the periodic table 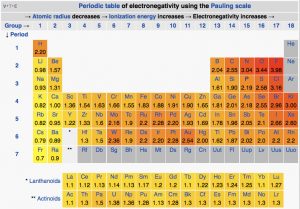 Here we can see that the electronegativity increases across the period and it decreases down the group. This can be explained with atomic number and the distance of valence electrons form nucleus.

Electronegativity increases across the period

Moving from left to right across a period, the number of protons and electrons increases while the number of energy shells stay same. Thus because of more attraction between increasing number of positive nucleus and negative electrons, the atomic radius decreases and the electronegativity (attraction of nucleus towards electrons) increases across the period.

Electronegativity decreases down the group

Moving down a group, the number of energy shells also increases with the increase of protons and electrons. So because of shielding effects of electrons in the increased inner shells, the attraction between electrons and nucleus (electronegativity) is reduced down the group.

Diagonal relationships in the periodic table

A diagonal relationship is said to exist between certain pairs of diagonally (not side by side) adjacent elements in second and third period in the periodic table. 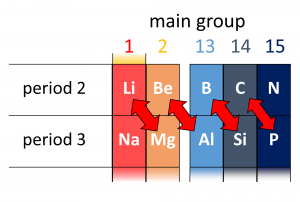 For example, lithium and magnesium, beryllium and aluminium, boron and silicon have similar properties. Boron and silicon both act as a semiconductors. This can be explained in terms of electronegativity.