The technique basically used is the effect of ionization energy in the molecule. At first the spectroscopy produces molecular ions (M+) of gas phase sample by electron ionization. The molecular ion (M+)  then breaks to form more ions. These ions would like to break in such a way that is comparatively stable or favorable. These ions will break further to form smaller ions. These ions are then separated in mass spectrometry according to their mass and charge ratio (m/z) and are detected in proportion to their abundance.

Here a molecule ABC is placed in mass spectroscopy for electronic ionization and firstly molecular ion ABC+ is produced which is then breaks in different ways to form more ions such as AB+, C+, A+, and BC+.

In spectrometry, atomic and molecular ions are deflected by magnetic fields. Electrically charged particles are affected by a magnetic field while neutral ones aren’t.

The following steps are involved in spectrometer to display a mass spectrum:

The atom or molecule is ionised by electron beam, to remove one or more electrons off to give a positive ion. This is also true even for things like most common negative ions (chlorine, for example) or neutral atoms like argon, for example. Most mass spectrometers work with positive ions.

The ions are then accelerated so that they all have the same kinetic energy. 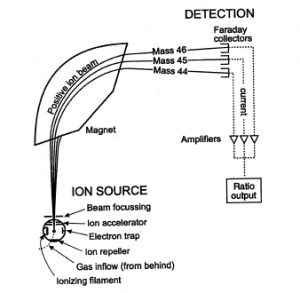 The ions are then deflected by a magnetic field according to their molecular masses. The lighter they are, the more they are deflected.

The amount of deflection also depends on the number of positive charges on the ions. The more the ion is charged, the more it gets deflected.

The beam of ions passing through the machine is then detected electrically.

The other ions are the fragmentation of organic molecules follow certain patterns which are related to the bond strengths and the stability of species formed. The identification of these fragments and their relative intensities in a mass spectrum are used to determine the structure of organic molecules.

These two isomers which can be distinguished by mass spectroscopy. The methyl group branched at C-4 in the latter compound, is easily broken off to give CH3+. Mass spectrum will show a large peak at m/e = 15.

The molecular ion represents loss of an electron and the peaks above the molecular ion are due to isotopic abundance. The base peak in toluene is due to loss of a hydrogen atom to form the relatively stable benzyl cation. This ion rearrange to form the very stable tropylium cation, and gives a strong peak at m/e = 91. The minor peak at m/e = 65 represents a neutral acetylene removed from the tropylium ion and the minor peaks below this arise from more complex fragmentations. 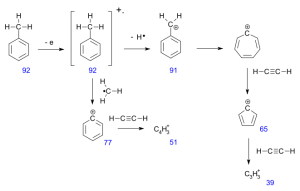